Member Spotlight: There Is Life With HIV, and I Am Proof 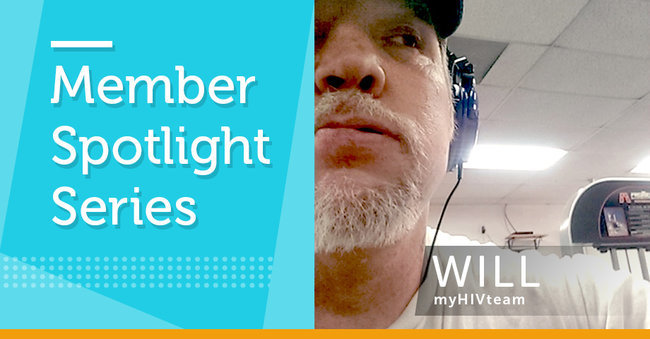 What do I know now that I wish I would have known when I was diagnosed?
That you can have a life living with HIV. When I was diagnosed in December 2003 I had already given up on life. I wanted to die but was always afraid of suicide. All my life I had been a follower. I always wanted to fit in. I wanted to be loved. My second marriage was on the rocks because I didn't know how to be a husband to a woman. I did however know how to do drugs and sleep with any guy I could. I have always - even to this day - been afraid of needles. But to fit in and be loved (so I hoped), I let a guy shoot me up. I was hooked instantly to him and the needle. Deep down I knew he didn't really love me, but I held on because when I was high and with him I didn't have to think about how much of a mess I had become.

It wasn't long before he dumped me for someone else. I heard a short time later he had stabbed that guy. I remember thinking that could have been me. I was sad that it wasn't. Soon I met another guy, and it was the same thing all over again. He would hit me and then get me high and tell me he was sorry. This went on for four years.When I decided to get clean, some of it was due to having a friend overdose and die in the house I lived in. I was so numb inside that I wasn't affected by his death. I was more concerned that the police would come and find out I had drugs. Or worse yet, I wouldn't be able to get loaded. I remember thinking, “I wish the coroner would come soon and take him so I can do these drugs.” When the funeral came, my friend’s mom came up to me and thanked me for trying to revive him through CPR. If she knew the reason why I tried so hard, she most likely would have never approached me. That's when I started to ask myself what kind of person I really was. That was motivation enough to get clean. Up to this point, I always thought I was a good person hanging around bad people. It was then that I realized I was like them. Guilt about my reaction to my friend's death was and has been my reason to stay clean. I know on drugs I am a totally different person. Towards the end, I started feeling like I was better than all this. I started wondering if I could get clean... but if I could, what would I do? I hadn't had a job in about eight years. I had child support arrears piling up, and I had never tried to get a driver's license in all my life. I put myself in rehab and started to clean up my life in 2008. Today I sleep, eat, work, and work out, and that is a better reason to live than getting loaded. I have some days where something small gets me in the mindset to say, “the hell with everything and everyone.” I am not sure if that is just a residual effect of all the drugs I used or just a lack of maturity. I have heard that people stop maturing when doing drugs, and whenever you stop you are still most likely the age mentally when you started drugs. When I have days like that I pray. I thank God for pulling me out of that life. I have so much to be thankful for. I just need to remember that on bad days. Today I am undetectable. I have a good driving record, I’m married, and I’m helping to rebuild my town after the 2018 Camp Fire in California. There is life with HIV. I am proof. This article was written by myHIVteam member Will as part of the Member Spotlight Series. Will likes to work out, listen to all types of music, and spend time with his wife.Do you want to be a part of the myHIVteam Member Spotlight Series?
Let us know here: support@myHIVteam.com

What a great article! I've been pix long ENUF to become an adult in years lol. So yes, there is life. I've lived a whole life since being diagnosed. I've had a career where I went to conventions and… read more

Member Spotlight: What HIV Means To Me

If you’ve been diagnosed with HIV, you may wonder how drinking could affect your health or...

If you’ve been diagnosed with HIV, you may wonder how drinking could affect your health or...
read article >