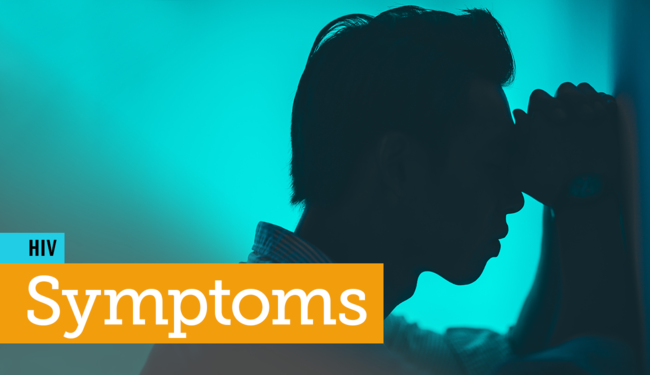 The symptoms of human immunodeficiency virus (HIV) vary with the stage of the infection. In people who begin HIV treatment soon after diagnosis and take treatment consistently every day, HIV is unlikely to ever progress or become symptomatic. People who do not take HIV treatment will eventually experience disease progression and worsening symptoms.

Also known as the primary or acute phase of HIV, the acute stage begins within the first two months immediately after infection. Soon after a person is infected, their body mounts a normal immune response to the virus. As the immune system tries to fight HIV, it produces HIV antibodies (proteins designed to identify and neutralize HIV) – a process known as seroconversion. During the acute phase, the virus replicates rapidly, and people are highly contagious.

Some people do not notice symptoms during the acute stage of HIV. Others experience flu-like symptoms such as swollen lymph glands, headache, sore throat, fever, rash, muscle and joint aches, upset stomach, and sores in the mouth. These symptoms may start between two and eight weeks after infection and may last for a week or two.

The chronic phase of HIV, also referred to as the clinical latent, asymptomatic, inactive, or dormant stage, lasts for approximately 10 to 15 years in most people who do not take HIV treatment. In some people, the chronic period is much shorter, and HIV progresses more quickly to the next stage. In people who consistently take HIV treatment every day, the chronic stage can be prolonged by several decades, and the disease may never progress.

A few people notice persistent swollen lymph nodes during the chronic stage of HIV. Otherwise, symptoms during this phase are rare. HIV continues to reproduce in the body, and it is possible to infect others. In those who are taking HIV treatment, it may be difficult to separate HIV symptoms from side effects of medication.

At the end of the chronic stage, levels of HIV within the body begin to rise, and numbers of CD4 cells drop as they are destroyed by the virus. Acquired immune deficiency syndrome (AIDS) is diagnosed when CD4 cells drop below 200 cells per cubic millimeter (cells/mm3) or when certain infections or cancers develop. People with AIDS who do not receive treatment die within approximately three years.

During AIDS, the final stage of HIV, the immune system has been rendered ineffective. AIDS itself does not cause symptoms, but it leaves the body unprotected against every infection. People with AIDS can become seriously ill or even die from bacteria, viruses, or fungi that would be unable to infect healthy people at all. This type of infection is known as an opportunistic infection. Some cancers are typical in people with AIDS because their compromised immune systems enable the cancer to develop and grow quickly. A few of the opportunistic infections and AIDS-related cancers (and their most common symptoms) frequently seen in people with AIDS include:

Occurring in 80 percent of people with AIDS who do not take treatment, PCP is believed to be caused by a common fungus. In people with AIDS, PCP causes fever, chest pain, trouble breathing, and fatigue. There are other varieties of pneumonia common in people with AIDS but unusual in healthy people.

CMV, a virus related to herpes, infects most people but does not cause illness except in those with compromised immune systems. In people with AIDS, CMV can infect the eyes – causing blindness – or attack the lungs, heart, brain, or gastrointestinal system.

MAC is a group of common bacteria that in people with AIDS causes abdominal pain, fever, night sweats, and fatigue.

TB is a leading cause of death in people with AIDS. TB most commonly affects the lungs, causing chest pain, coughing up sputum or blood, weight loss, fever, and fatigue.

Also known as a yeast infection or thrush, candidiasis is caused by the fungus Candida albicans. Although minor yeast infections can be a nuisance even in healthy people, candidiasis can affect immunocompromised people such as those with AIDS in more severe ways. Candidiasis can cause difficulty swallowing or altered taste in the mouth; cracks and sores in the corners of the mouth; burning, itching, and thick, white discharge from the vagina; chest pain when it affects the esophagus; and pneumonia in the lungs.

Toxoplasmosis is an infection by the microorganism Toxoplasma gondii, which can be present in cat or bird feces and undercooked meat. Toxoplasmosis is harmless in healthy people, but in people with AIDS, the infection can cause symptoms including headache, fever, confusion, seizures, and coma.

A type of cancer related to a common herpes virus, Kaposi sarcoma causes darkened purple or brown spots on the skin. If Kaposi sarcoma spreads to the lungs or intestines, it can cause death.

Non-Hodgkin lymphoma can develop in people with or without HIV, but certain types of NHL are more prevalent in HIV-positive people. Primary central nervous system (CNS) lymphoma begins in the brain or spinal cord. Symptoms of CNS lymphoma include confusion, memory problems, seizures, and paralysis of the facial muscles.

What Are the Early Signs of HIV Infection?

Some people do not notice any symptoms in the weeks or months after being infected with HIV. Others notice swollen lymph nodes or a period of flu-like symptoms during the first (acute) stage of HIV.

What do CD4 counts tell us?
HIV infects and destroys CD4 lymphocytes, also known as T-helper cells. Doctors can measure the number of CD4 cells with a blood test. CD4 levels are an important indicator of the effectiveness of antiretroviral treatment (ART) and whether HIV is progressing.In healthy people who do not have HIV, normal levels of CD4 cells are higher than 500 cells per cubic millimeter (cells/mm3). Those who are HIV+ and effectively treating their HIV with antiretroviral drugs may achieve normal levels of CD4 lymphocytes. CD4 levels that are lower than normal may indicate that the current treatment regimen is not effective enough to suppress HIV, and it may be necessary to switch to a different type of ART to prevent disease progression.CD4 levels are not used to diagnose HIV infection, but they are potentially criteria to diagnose AIDS.

Managing HIV isn't easy. On top of that, it can sometimes cause weight gain. Losing the extra...

Managing HIV isn't easy. On top of that, it can sometimes cause weight gain. Losing the extra...
read article >

"Is there something you can take to get your energy back? I always feel like I’m carrying a 1000...

"Is there something you can take to get your energy back? I always feel like I’m carrying a 1000...
read article >