HIV: Cause, Prevention, and Risk Factors 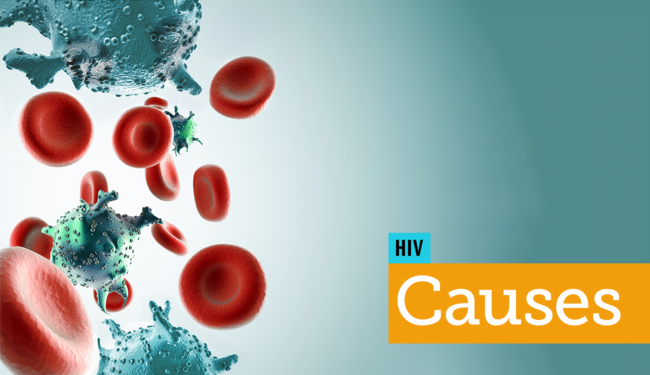 Human immunodeficiency virus (HIV) is the cause of HIV infection. HIV infects a specific type of immune system cells called CD4 lymphocytes or T-helper cells. The role of healthy CD4 cells is to organize other immune cells to respond to infection, effectively stimulating the immune response. When HIV infects a CD4 cell, it hijacks the process by which the cell replicates itself and uses it to produce copies of HIV instead, releasing them into the body to infect more CD4 cells. HIV also destroys CD4 cells, making it difficult for the body to coordinate an immune response to invading pathogens such as viruses or bacteria. Lowered levels of CD4 cells weaken the immune system and leave the body unable to protect itself from cancer and infections.

DNA and RNA are different types of molecules used to communicate genetic instructions. Most viruses translate DNA into RNA, which instructs the cell on which proteins to produce. HIV is known as a retrovirus due to its ability to reverse the usual process, translating its RNA into DNA and inserting it into the nucleus of the cell, which then reproduces more HIV.

How Do You Get HIV?

In people infected with HIV, the virus is carried in blood, semen, pre-seminal fluid, vaginal secretions, rectal fluid, and breast milk. In order to spread HIV, the infected fluid must come into contact with the uninfected person in one of three specific ways:

After being on treatment for several months, many HIV-positive people can bring their viral load (the measure of HIV virus in their blood) down to such low levels that it is undetectable. People with an undetectable viral load (UVL) are believed to be incapable of spreading HIV to others as long as they continue to consistently take treatment.

Decades ago, when little was known about HIV and AIDS, people were not sure exactly how the virus was transmitted. Myths surrounding HIV persist, and some people still fear close contact with those who have HIV. However, clinical studies have proven that HIV cannot survive outside the body – including on skin, in water, or in the air – and many bodily fluids do not carry HIV. The following bodily fluids and types of contact cannot transmit HIV between people:

Anyone – regardless of age, sex, sexual orientation, or ethnic background – can become infected with HIV.

Lifestyle choices and other behavioral factors have the most influence over who gets HIV.

Risk for contracting HIV increases if you have other sexually transmitted infections (STIs) such as herpes. In fact, having an STI doubles the risk for HIV infection in HIV-negative individuals who have sex with an HIV-positive person of the opposite sex.

Gay and bisexual men have the highest rate of HIV infection, making up 67 percent of those diagnosed in the U.S.

Ethnic background has a strong influence over HIV risk. In the U.S., people of African descent accounted for 44 percent of HIV diagnoses in 2016 although they make up only 12 percent of the population. People of Latino or Hispanic background also have a higher risk for contracting HIV.

In general, women are less likely to contract HIV than men. In 2016, women made up about 19 percent of new HIV diagnoses in the U.S. However, transgender women who have sex with men have a high rate of HIV infection.

People in their 20s and 30s are more likely to be diagnosed with HIV than those in other age groups.

Risk for HIV infection varies by geographic region in the U.S. In 2016, more than half of new HIV infections were in the southern states. Only 38 percent of the U.S. population live in the South. Many people associate HIV with weight loss. However, this is not always the case — especially no...

Many people associate HIV with weight loss. However, this is not always the case — especially no...
read article > If you or a loved one with human immunodeficiency virus (HIV) are having ongoing sleep problems, ...

If you or a loved one with human immunodeficiency virus (HIV) are having ongoing sleep problems, ...
read article > Maintaining a healthy weight after being diagnosed with human immunodeficiency virus (HIV) can be...

Maintaining a healthy weight after being diagnosed with human immunodeficiency virus (HIV) can be...
read article > HIV affects everyone differently. While most people can continue performing their day-to-day act...

HIV affects everyone differently. While most people can continue performing their day-to-day act...
read article > Thanks to the development and widespread use of highly active antiretroviral therapy (ART) since ...

Thanks to the development and widespread use of highly active antiretroviral therapy (ART) since ...
read article >