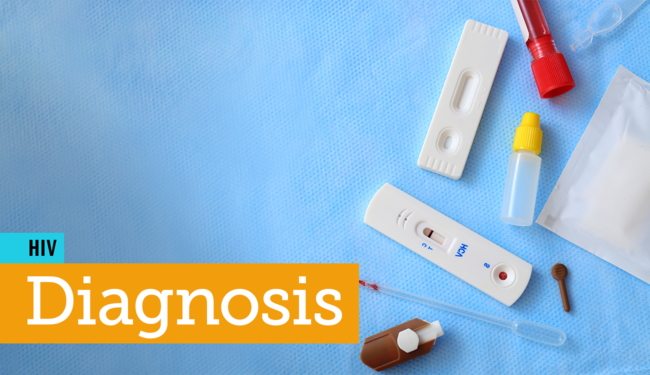 The process for diagnosing HIV involves one or more blood or saliva tests. If results are inconclusive, the doctor may order more tests. For tests to be effective and conclusive, it is necessary to wait a certain period of time for HIV to replicate and reach a detectable level. The earliest reliable test for HIV is effective within one to four weeks after exposure. Nearly all tests are reliable about three months after infection.

Anyone who knows or suspects they have been exposed to HIV should be tested as soon as possible and avoid behavior that might risk spreading HIV to others in the meantime. If you are concerned you may have recently been exposed to HIV, talk to your doctor about post-exposure prophylaxis (PEP), a treatment regimen that can help prevent you from becoming infected.

Who Should be Tested for HIV?

Starting HIV treatment early gives people with HIV the best chance for long, healthy lives and also reduces the risk for spreading HIV. For these reasons, the Centers for Disease Control and Prevention (CDC) recommends that everyone between the ages of 13 and 64 be tested for HIV at least once. They also recommend screening all pregnant women for HIV. The CDC recommends annual testing for people who:

For gay or bisexual men who are sexually active, the CDC recommends testing for HIV every three to six months.

How Is HIV Diagnosed?

HIV is diagnosed by taking samples of blood or saliva and analyzing them for molecules related to HIV.

Different types of HIV tests look for different molecules that can provide evidence of infection. Some HIV tests are not conclusive for weeks or months after a person is infected, while others can be used sooner. Note that any HIV test may return a false negative result if a test is taken too early.

The polymerase chain reaction (PCR) test is another early test that can diagnose HIV and determine viral load. PCR tests can be effective within two to three weeks of exposure.

RNA tests are generally used to confirm an inconclusive HIV diagnosis and monitor the progress of the disease and how effective treatment is at reducing the viral load. PCR tests are used to monitor treatment effectiveness in HIV-positive people and to test babies of HIV-positive mothers shortly after birth. Viral load tests tend to be more expensive than other types of HIV tests.

The enzyme-linked immunosorbent assay, or ELISA test, only checks for HIV antibodies. The ELISA test is nearly 100 percent effective at diagnosing HIV in the chronic/latent stage – a few months after a person is infected – but may miss HIV infections in the acute or early stage within the first two to three months. If your ELISA test result is negative, but you strongly suspect you have been exposed to HIV, it is recommended to get another test after waiting one to three months.

If an ELISA test is positive for HIV, the clinician may perform a HIV-1/HIV-2 differentiation immunoassay or a Western blot test to confirm the infection.

Western blot tests are performed less often than they were previously because results took several days to return, and the blood test failed to identify some strains of HIV. Western blots become effective about two months after HIV exposure. Western blots are mainly performed to confirm positive ELISA test results.

There are two home HIV test kits available that are approved by the U.S. Food and Drug Administration (FDA).

OraQuick is performed at home using saliva. Results are available within about 20 minutes. OraQuick is effective about three months after exposure to HIV. About 1 in 12 people who take OraQuick receive a false negative result – the result says they are HIV-negative, when in fact they are HIV-positive.

How Is AIDS Diagnosed?

Acquired immune deficiency syndrome (AIDS) is the third and final stage of HIV. AIDS is diagnosed under any of the following conditions:

See what others are talking about

We all respond differently to information about our health. After learning you have HIV, you...

We all respond differently to information about our health. After learning you have HIV, you...
read article >